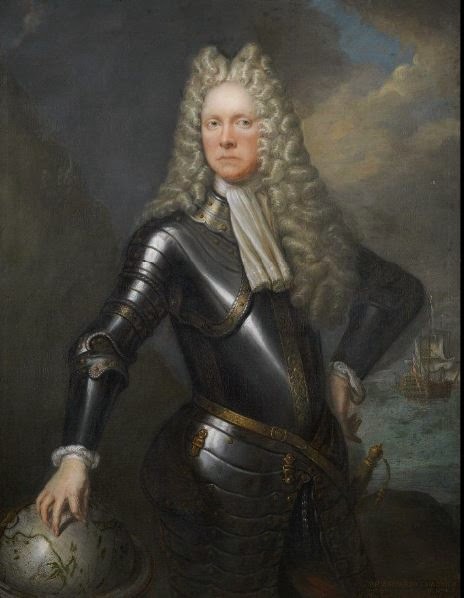 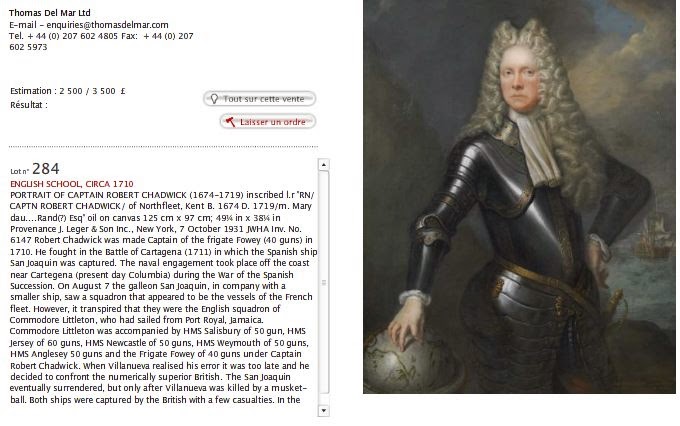 PORTRAIT OF CAPTAIN ROBERT CHADWICK (1674-1719) inscribed l.r "RN/ CAPTN ROBERT CHADWICK/ of Northfleet, Kent B. 1674 D. 1719/m. Mary dau....Rand(?) Esq" oil on canvas 125 cm x 97 cm; 49¼ in x 38¼ in Provenance J. Leger & Son Inc., New York, 7 October 1931 JWHA Inv. No. 6147 Robert Chadwick was made Captain of the frigate Fowey (40 guns) in 1710. He fought in the Battle of Cartagena (1711) in which the Spanish ship San Joaquin was captured. The naval engagement took place off the coast near Cartegena (present day Columbia) during the War of the Spanish Succession. On August 7 the galleon San Joaquin, in company with a smaller ship, saw a squadron that appeared to be the vessels of the French fleet. However, it transpired that they were the English squadron of Commodore Littleton, who had sailed from Port Royal, Jamaica. Commodore Littleton was accompanied by HMS Salisbury of 50 gun, HMS Jersey of 60 guns, HMS Newcastle of 50 guns, HMS Weymouth of 50 guns, HMS Anglesey 50 guns and the Frigate Fowey of 40 guns under Captain Robert Chadwick. When Villanueva realised his error it was too late and he decided to confront the numerically superior British. The San Joaquin eventually surrendered, but only after Villanueva was killed by a musket-ball. Both ships were captured by the British with a few casualties. In the following years Chadwick was made Captain of the Launceston (40 guns) in 1717 and the Guernsey (50 guns) in the year he died. *